Kick technique can be divided into really small parts. Players own ame is to play as well as he/she is able to, and help his/her team in all ways to perform better on the field. Game itself consists several different performances and acts, kicks as well.

Different types of kick techniques, being able to use different technique at the right moment, and recognizing the correct moments of use; play a big role. Right choice, a right correctly performed and controlled technique takes the game into desired direction, despite if it is moving the ball near or far.

Kick technical skills can be roughly divided into passing on the ground, in the air, from a moving ball or a placed ball as a set piece, corner kick, goal kick, goalkeepers play from hands or from the ground, shooting, volleying, free kicks, a long ball in the air (cross/long pass) and all with different variations.

A player helping his/her team controls the ball and determines it´s direction and power as a sum of many factors, but mostly with his/her legs and body movements.

Training kick techniques is suitable for any player no matter the age or gender. Kick technique coaching, learning special skills, and precise training under the guidance of a kick technique coach provides the player an excellent platform for their own personal development. Keeping in mind the aim to help the player later to help his/her team to perform better on the field.

”Eeva-Maria’s coaching gives our players a great chance to develop their kick technique in various ways on different aspects on the field.
We can for example use technical coaching to support our set pieces in the games. Warmly recommend!” 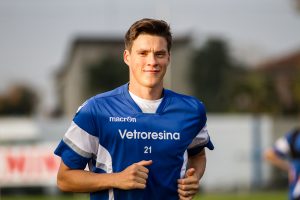 ”Long passes and shooting have been always hard for me to learn and develop these skills. OrsaSport’s coaching has given me tools to add distance, accuracy and security in long passes, and I can from my behalf recommend Eeva-Maria’s coaching also to all defense positioned players.”

”There is always intensive tempo at the training sessions. Eeva-Maria sees the strengths and development targets of each player. Every exercise aims to a better and more effective kick technique, and leads towards a professional career.”